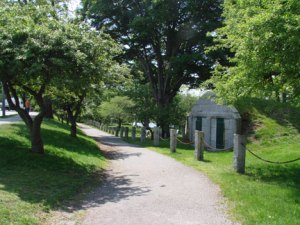 For a few spring weeks each year, the Church Street path flanking the Old Burying Ground and the Lake bursts into bright and beautiful bloom. The “Floral Way” comes to life in blossoming pink and white profusion, proclaiming the arrival of spring and the promise of summer to come.

Those who enjoy the beautiful sight today would probably be surprised to be told that part of it was a public dump in 1896, and later was the site of the old Porter-Milton ice house.  From these inauspicious beginnings would come the Way, landscaping at Veteran’s Field, and the construction of Hall Park.

The Floral Way itself began with Mrs. Archibald Hume. Mrs. Hume and her husband were the first caretakers-in-residence at the Col. James Hartshorne House. The House, purchased by the Town in 1929, was restored as part of Wakefield’s celebration of the Commonwealth of Massachusetts’ 300th anniversary in 1930. During the anniversary year, the Col. James Hartshorne House Association was founded to help maintain the property. In 1933, Mr. and Mrs. Hume came on board to live at the house and to help with its maintenance.

Mrs. Hume was an avid gardener and was largely responsible for the beginnings of the lovely “Hartshorne House Gardens” behind the house. Anxious to enlarge upon the garden-scape of the area, she watched Tidal Basin plantings in Washington, DC with interest.

The original 3020 cherry blossom trees planted in the Washington, DC Tidal Basin had been donated by the city of Tokyo in 1912. Additional trees were planted; they were so well established by 1935, that the first “Cherry Blossom Festival” was held that year. The festival was suspended during the War years, but would resume in 1947.

One year later, Grace Hume decided that a mini cherry blossom circle around Lake Quannapowitt might be a good idea for Wakefield.

She took her idea to the late Gardner Campbell, then managing editor of the Wakefield Daily Item, and her brain child took flight.

The proposal to beautify one of the community’s most attractive locales, the lake area, was enthusiastically received.  Early on, it was established that the proposed Floral Way would be a living memorial to those who gave their lives in the service of their country.  The Wakefield Garden Club, which has been a dedicated benefactor over the years, assumed sponsorship.

The response from the community was quick and cooperative, with participation from individuals as well as from local organizations.  By spring, 1949, the first flowering trees were purchased.  The original Hume concept of cherry trees had to be modified.  The Massachusetts Horticultural Society advised that the climate here and the exposed location would be more favorable for flowering crabtrees.  The committee, eager to see its project bloom, chose the largest trees recommended by the nursery for successful transplanting.  The innovative design of the Floral Way included granite taken from the foundation of the Old Town Hall, which had been donated by Cyrus Wakefield.

Throughout its life, the Floral Way has seen additional plantings and improvements, and has achieved recognition far beyond the boundaries of the community.  In 1951, the Better Homes and Gardens Magazine awarded the Floral Way a plaque in its annual nation-wide competition for civic improvement.  The Garden Club each year celebrates the flowering of the trees with its annual Floral Way Festival.

A living memorial to local servicemen and women of all wars, Wakefield’s lovely Floral Way stretches along the perimeter of its Old Burying Ground.